I picked up one of the magnets to examine it. As I dropped it back into the box, it quickly shot across the bench, affixing itself to the nearby nickel-plated electrical assembly. I had more thoughts. Work is equal to the force times the distance. However, work is also energy, and energy over time is power. I idly wondered how much energy it took to move that magnet over the distance of a quarter metre to the nickel-coated pedestal. I had a comical thought. Maybe if I had millions of magnets and millions of nickel-plated targets, I could harness all this energy and power my time machine.

Crazy talk. However, magnets were used in practically every power generation facility in the world. It did not matter whether your source was coal, oil, or even nuclear fuel cells, the goal was the same — to convert water into steam. This then drives a turbine that rotates an electric coil through a magnetic field, causing current to flow, and powering cities and towns. They were called electromagnetic generators, or EMGs.

If I could simulate an electric coil passing through a fluctuating magnetic field, then I could generate electricity. It took three months of trial and error, but I finally arrived at the answer. I originally started along the wrong path, expecting the solution to be complicated, relying on intricate physics algorithms and integrated with a myriad of high density computer boards. Then one morning, when gazing out the window at yet another beautiful sunrise and admiring the simplicity of the physical Universe, it dawned on me. It was simple really; childishly simply. Simple is as simple does.

A standard bar magnet has two poles, a north pole on one end and a south pole on the other. The magnetic field wraps about the magnet and looks something like this:

That’s all find and dandy, but such a field is static — non-moving. There is nothing in this simple geometry that would generate electricity, but what if I added more magnets? Specifically, what if these magnets were added to form an alternating-pole geometric pattern? The fields would overlap and combine, forming a dynamic magnetic field.

I played around with this idea for a few days before homing in on the obvious. By creating a circle of multiple standard bar magnets, opposing their poles and separating them by slivers of non-magnetic spacers, the field mutates and becomes: 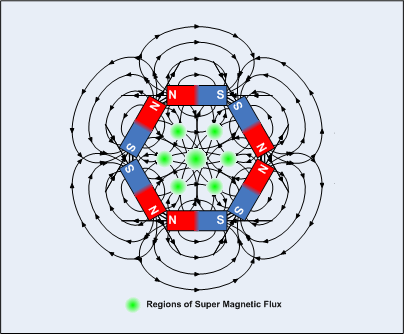 The superposition of multiple overlapping and opposing magnetic fields creates regions of super magnetic flux, or in layman’s terms, a changing magnetic field. Encapsulating this magnetic array in an electric coil positioned over these areas of flux creates a significant electric current. Through all this play I had created a new power source.

However, as with all such inventions, when applied to the real world it was more complicated than that. The power source needed to be compatible with my lab equipment. Again, simply put, it had to masquerade as a standard electrical wall receptacle. Otherwise, I would need to waste precious power converting between what the PCB generated and what my lab equipment could use. This took me another three months of research and design.

∞  Excerpt from the digital diary of Dr. Horatio Herzkrafter

Dance of the Universal Fabric

Time and space are lovers, intertwined in a dance that formed the very fabric of the Universe. It was a bond that even Einstein failed to fully appreciate, oversimplifying the intimacy of their embrace. His philosophy continued to treat each entity as separate and distinct when in fact both their hearts beat as one. Rational thought found this symbiotic relationship difficult to comprehend as there is nothing in the human equation that allows us to perceive time as we perceive space. There’s the rub, how can one see the truth when you are blinded by the lie created by your five senses? Many still persist in treating them as unique, weaving time into the fabric of space to generate some fancy formulae, maybe even some Nobel Prize material, but in reality it’s nothing like that at all.

It was this epiphany that allowed me to build my time machine, a device that can independently manipulate temporal and spatial coordinates. Since technically it’s a time and space transporter, I christened it a Tasporter. This made Hendley chortle.

∞  Excerpt from the digital diary of Dr. Horatio Herzkrafter